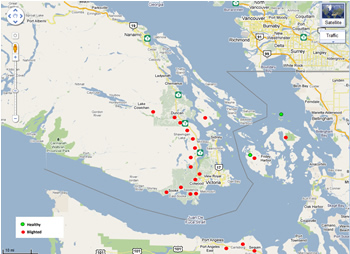 Some more photos of blighted and unblighted Arbutus.

“I took a boating trip last month from Port Townsend to Gabriola Island (just east of Nanaimo on Vancouver Island). All the madrone trees along the shore of the small islands along the way, and inland a mile (which is as far inland as I hiked,) looked great. There was no sign of the dead leaves at the tips, of any diseased leaves at all, no black spots, nor of the branch cankers that plague the trees here in Port Townsend. I did not get close enough to Vancouver Island  to observe theirs, but was ashore on several of the San Juan and Gulf Islands. I wondered if the island trees absorb enough salt to protect them a little from freeze damage?  Or maybe just the isolation protects them.”

“We live on the East side of Mt Dallas at about 530’ elevation.  Have a grove of small Madrones and one quite large one (about 50 ft, with a 20-22” diameter ) It is thriving and is loaded with flowers, with just a few brown leaves on lower branches. Some of the smaller ones took a winter hit and have mostly brown leaves, but all have very healthy looking green buds and some are all green and flowering.”

“We are the stewards of North Finger Island, a private island in the Sucias, and spend a lot of time in the forest there year-round. NFI is a virtual madrone nursery. Protected from foraging deer, young seedlings thrive by the thousands, and there are very old groves of madrones as well. Other than the widely pervasive frost damage this winter, which left a lot of brown leaves, we have not noticed any systemic problem with our madrones.”

“My observation is overall just about every arbutus tree has some form of this blight from Duncan, BC to Sooke BC. “

“I noticed significant foliar dieback on numerous Arbutus trees located on the Malahat Drive on Vancouver Island. Specifically located on the Island Highway 1 North of Goldstream Provincial Park which is just North of Victoria.  Large Arbutus were almost completely affected with leaves having turned a grey brown. … I have not heard of or seen any blight evidence on the Northern half of the Island yet.”

“Noted about 12 + trees in this location on Vancouver island known as LePage road.  Most are dead and or near dead from what appears to be the blight you are interested in.” 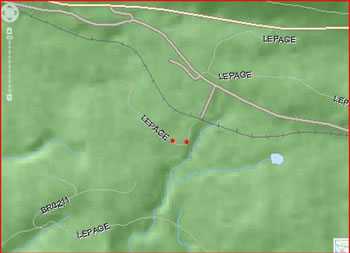 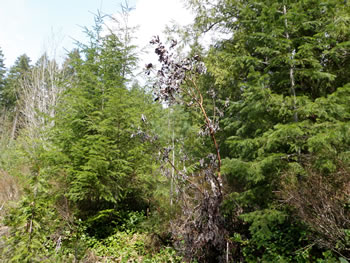 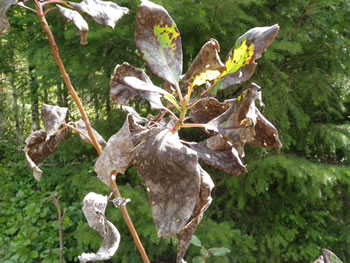 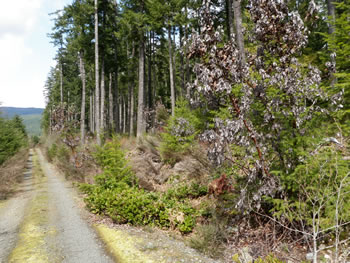