The American Public Gardens Association (APGA) is working with the National Plant Diagnostic Network to develop a Sentinel Plant Network, under a grant funded by USDA-APHIS under the 2008 Farm Bill.

APGA recently launched a SPN web page that provides an overview of the program, and its mission, the benefits of participation and information on how member gardens can get involved.

APGA has been working closely with NPDN to develop two “train-the-trainer” modules for public gardens. The first module addresses the impact of plant pests and pathogens and the importance of early detectors as well as providing an overview of the SPN, its primary partners, and the role of participating gardens. The second module, which is focused on the “best practices” of pest /pathogen scouting and reporting and outlines the proper methods of sample collection and submission, will provide valuable instruction to public garden professionals and volunteers. Gardens participating in SPN will be encouraged to use this module in classes offered to the general public, thereby giving them the necessary training to be effective citizen scientists contributing to the early detection of potential threats. Preliminary versions of these modules are expected prior to APGA’s conference in June and will undergo beta testing over the summer before being integrated into the SPN regional professional development workshops this fall and winter.

APGA is also developing a freestanding website marketed towards kids and educators and will work with a curriculum specialist to develop a teacher / parent guide to these resources.

For her senior project, a student at Bellarmine High School, Tacoma, is testing several isolates of Phytophthora and Pythium spp. to determine whether they cause disease on Noble fir seedlings. Noble fir (Abies procera) is commonly grown as a Christmas tree in western Washington and some growers irrigate using local stream water. Some of the test organisms have been collected from streams in western WA in the 2011 stream monitoring program. Others are known pathogens of Noble fir and are included as standards or to obtain more information about their behavior on roots. Now you have data, what to do with it?

How to write a scientific article – each journal will have its own format, but the basic ingredients can be found at this link:

How to write a paper in scientific journal style and format 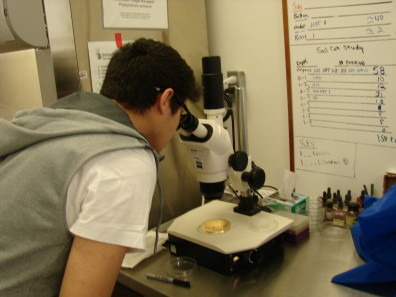 Students from local high schools, community colleges, and universities can participate in research projects related to Phytophthora and other oomycetes.

Some projects done by students in 2012:

Temperature effects on root infection of Noble and Frasier fir by Phytophthora species isolated from western Washington streams and soils.

Some projects done by students in 2011:

Some projects done by students in 2010: Temperature effects on root infection of Noble and Fraser fir by Phytophthora species isolated from western Washington streams and soils.

Does exposure to cold increase severity of leaf blight caused by the fungus Phacidiopycnis washingtonensis on Pacific madrone (Arbutus menziesii)?

A study of root infection of Viburnum by Phytophthora ramorum. 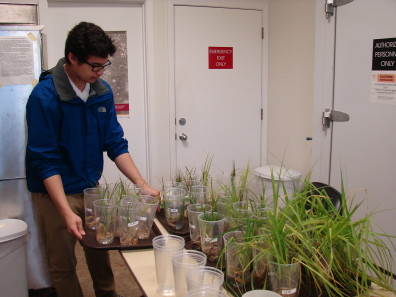 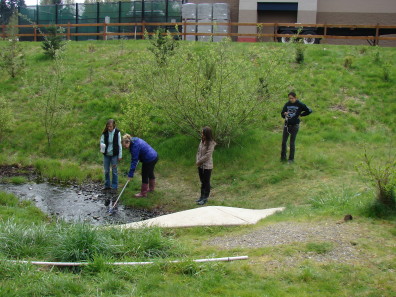 These projects were part of the stream monitoring for Phytophthora project:

We have a number of opportunities for local high school and college students to work on research projects involving sudden oak death and other plant pathology related topics. 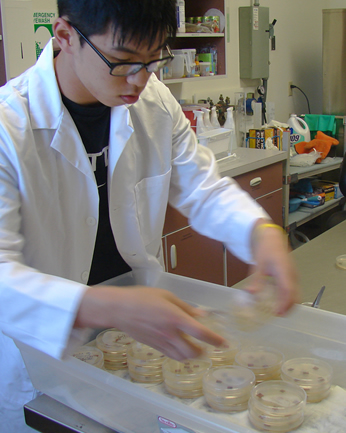 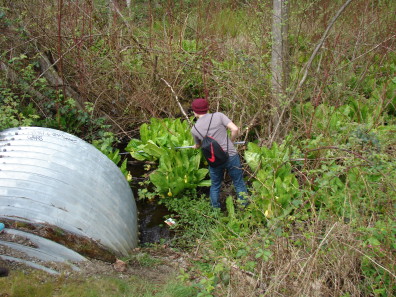 Click here to see the results of these projects

Oomycetes are fungus-like organisms found in marine, freshwater, and terrestrial environments. Some, such as Phytophthora, Pythium, and Saprolegnia, are parasites of plants and animals. DNA sequence data has revealed that these organisms are not fungi, but are more closely related to brown algae and diatoms. We will be “fishing” for these organisms by using baits form various plant species.

Ornamental plant nurseries have historically been a source of invasive plant diseases since they acquire plant material from many different sources and disease symptoms can be difficult to recognize on some hosts. like disease epidemics in the human population, once the disease moves onto a plant host with high susceptibility it can be very devastating. Phytophthora pathogens are the cause of some of the most destructive plant disease outbreaks, such as Sudden Oak Death, caused by P. ramorum.

This project, we will sample stormwater retention ponds in newly landscaped housing developments in Puyallup. The goal is to identify Phytophthora species that may be moving from landscaped areas into the ponds. This will help us to determine which pathogens are present on the landscape plants and allow us to detect any invasive species early. In addition, some baseline information about Phytophthoras and other oomycetes in the these ponds will be collected.

We are looking for someone who is interested in getting experience working in a laboratory. Volunteers and students with an interest in environmental microbiology and/or plant pathology would benefit from working on this project. In the lab at WSU Puyallup, symptomatic material from leaf samples will be cultured on selctive media. Colonies of P. ramorum and other Phytophthora species will be isolated and identified using morphological and molecular methods.

For more information or to volunteer contact Marianne Elliott.