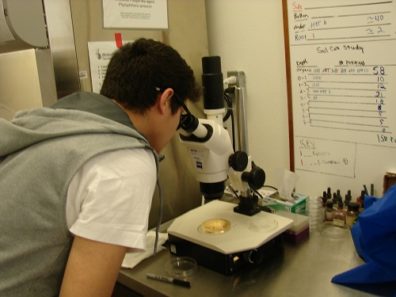 Over the past several years, numerous Phytophthora plant pathogens have been detected in California native plant nurseries and habitat restoration sites. These findings spurred follow-up investigations that indicate a similarly high infestation rate in Oregon and Washington native plant nurseries. This year we will survey two types of restoration sites to determine whether the same Phytophthoras found in the nursery survey are present in the restoration planting and if they are causing damage to natural and installed plants.

Soil and water bait samples will be collected from a forested site (Seward Park, Seattle, WA) and a riparian site (Puyallup WA) and processed in the lab at WSU Puyallup. Phytophthora species will be isolated and identified using morphological characters and DNA sequencing.

Recycling used containers, flats, and trays are critical control points where weeds and diseases may infest nursery crops. Most growers may choose to re-use these containers to reduce the costs of buying new materials, but this is a risky practice unless they are properly sanitized. Disinfestation of these items is often overlooked or compromised in nursery production because of the labor and time involved. Heat treatments such as hot water dip or steaming do not require that the pots be cleaned first, thereby eliminating one step in the process. Steaming may prove to be more labor-saving and less costly than chemical disinfectants or hot water dip tanks for disinfecting containers that will be re-used.

We will conduct tests of heat tolerance of pots, flats, and pipe of different plastic materials. These items will be exposed to repeated steam treatments to determine their failure rates. We will examine the materials after steaming and rate their durability.

A Phytophthora species was isolated in June of 2014 from a Christmas tree farm/nursery in Orting from Fraser fir (Abies fraseri) seedlings (about 2 years old) in a transplant bed. Extensive mortality was observed and attributed to this Phytophthora. There was no match between DNA sequence of two gene regions with any known Phytophthora species. We plan to measure growth rate in culture at 7 different temperatures and assess pathogenicity to several Abies spp. using stem inoculations with the pathogen. This information will be used to develop a formal species description of the new Phytophthora.

The recommended depth for treating soil to remove inoculum of P. ramorum is 30 cm, however there is little research to support this. A 2007 study by Dart et al. showed that P. ramorum was detected in soil cores from three WA nurseries at depths of organic layer, 0-5 cm, and 5-10 cm. Soil at 10-15 cm was sampled and no P. ramorum was found. No sampling was done at depths >15 cm. If P. ramorum did not move to the depth of 30 cm, much time and money could be saved on steam treatment, as reaching the target temperature of 50C at 30 cm depth is problematic, and impossible in some soil types such as saturated clay soils.

Soil properties influence the ability to steam treat a soil and the time needed. Moisture, compaction, and presence of organic matter are a few of these properties. Container areas in many ornamental nurseries are located over soils that are unsuitable for in-ground production, which usually means that they are compacted.

Information from this study will determine whether shorter steaming times could be used in P. ramorum infested soil. It will also provide data on the movement of inoculum in different soil conditions that can be found at nurseries.

Some small scale testing is being done in an APHIS-approved biocontainment lab at WSU Puyallup. Rhododendron leaves colonized with P. ramorum will be placed on the surface of saturated soil columns of varying depths and soil types. Flow-through water is tested for the presence of P. ramorum using leaf baits. Samples from larger scale, unsaturated soil columns are being shipped from the NORSDUC research site in San Rafael, CA and tested for P. ramorum at WSU Puyallup.

Isolates of P. ramorum will be tested on WA forest hosts to complete Koch’s Postulates for these host/pathogen combinations. Koch’s Postulates involves three steps: 1) infecting the host with the pathogen, 2) observing symptoms on the host, and 3) re-isolating the pathogen from symptomatic host material.

Plants will be inoculated with zoospores of each isolate at concentration of between 3-6 x 104 zoospores/ml. Plants will either be sprayed to runoff or foliage dipped in zoospore suspension. Check plants will be sprayed or dipped in sdH2O. After inoculation plants will be covered with plastic bags to maintain humidity and incubated for 21 days in BCU at ~20C. Symptoms will be assessed and isolated onto selective media to recover the pathogen. The experiment will be repeated once.

The results of this project will be prepared for publication.