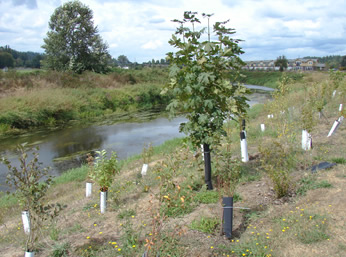 The overall goal of this project is to protect U.S. nurseries, communities and wildlands from damaging plant pathogens by improving our understanding of human- assisted pathogen movement in areas where propagative material collection, plant production or outplanting serve as a connection.

1) Estimate the prevalence of Phytophthora and other plant pathogens in native plant nurseries, restoration sites and forests.

2) Analyze distribution patterns and mode of movement to determine direction and pathways for plant pathogen movement and introduction into nurseries, landscapes and wildlands.

Via a regional, multi-state approach we will provide insights into plant health threats over a broad geographic range allowing an understanding of plant health in states that have been sources of Phytophthora ramorum with high production and export volumes of horticultural and native plants.   The findings will elucidate pathways for pathogen movement so will serve as the foundation for prevention: regulatory and management action could be better targeted to high risk pathways.

The project will be conducted by the team responding to the detection of P. tentaculata in several native plant nurseries in California and is a logical next step to expand understanding of plant pathogen risks to U.S. resources. The first find of P. tentaculata in the USA needs further investigation, if we understand the pathways for its movement, we may be able to prevent further damage and future introductions.

Note. Project personnel will coordinate with county or state Agriculture Departments prior to visiting nurseries. In some situations, due to regulatory concerns, Phytophthora will only be identified to the genus level.   Sampling by university employees or Phytosphere Research does not qualify as “official” samples for regulatory purposes.

Phytophthora ramorum and other invasive pathogens have raised awareness of the interconnections between nurseries and wildland forests and the significance of the nursery plant pathway for the movement and establishment of plant diseases in the USA. But how pathogens enter the nursery system is not known.

Recently Tubakia sp. was identified as the cause of an oak decline in several Sierra Nevada foothill towns (Latham & Blomquist personal communication).   The pathogen was also detected in a native plant nursery that operates in a regional park in Contra Costa County. This raises important questions: Did the pathogen enter that nursery from forest plants?   How did Tubakia sp. enter the nursery?

Over the past several years in California, Phytophthora tentaculata has been detected in native plant nurseries and outplanted at restoration sites but how it entered the native plant nurseries is not known.   These are the first detections of P. tentaculata in the USA (Rooney-Latham and Blomquist 2014). Phytophthora tentaculata is listed as a threat to nurseries and forests in federal New Pest Response Guidelines (APHIS 2010). To prevent long distance movement of this new pest, the USDA APHIS New Pest Advisory Group determined that P. tentaculata is “actionable and reportable”. New introductions such as P. tentaculata have the potential to move both from nurseries to the field and potentially back into other nurseries through processes that involve transport of root divisions or soil from contaminated sites. With wide-host ranges, once they become prevalent, they may also threaten agricultural production and trade.

In WA state, Phytophthora taxon ‘pgchlamydo’ is commonly detected in streams and nursery ponds and has been found to infect ornamental nursery stock. It has also been isolated from cankers on tanoak in Oregon (Hansen and others 2009); dead coffeeberry (Rhamnus californica) and coast live oak (Quercus agrifolia) in Bay Area forests; and on nursery hosts in California (Yakabe and others 2009) and Maryland (Bienfapl and Balci 2014). This ubiquitous pathogen has the potential to be invasive in areas where it encounters a susceptible host. It is not known to what extent P. taxon ‘pgchlamydo’ causes disease on PNW native plants and whether these plants are a reservoir of the organism that can then move into nurseries via infested stream water.

These are just a few examples of the porous boundary between wildlands and both native plant and horticultural nurseries. Pathogens can move in water, on seed or animals, in soil and plants themselves leaving nurseries and forests vulnerable to pathogen introduction. To prevent pathogen introductions along these pathways, we need to better understand the modes and directions of movement and incidence of pathogens, so we propose to survey for pathogens in restoration sites, forest plantations, native plant nurseries and horticultural nurseries where plant production serves as a “crossroads” for potential pathogen movement. We will analyze patterns of distribution, age and severity of infestations to infer direction and mode of movement as well as develop best management practices for sanitation in native plant nurseries.