Read how The Bloedel Reserve, a public botanical garden in Kitsap Co, WA, is dealing with a P. ramorum infestation. 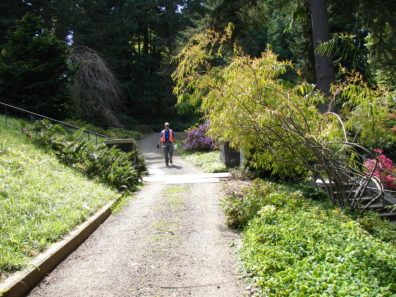 Reports on Sudden Oak Death don’t seem to be nearly as common as they were a few years ago. The invasive plant disease, which has devastated oak stands along the West Coast, continues to spread in northwestern California and southwestern Oregon. But funding, public engagement, and solutions have been hard to come by.

Fourteen native plant nurseries have joined the California Department of Food and Agriculture (CDFA) Best Management Program (BMP) for Ornamental and Native Plant Nurseries. The program also serves 14 ornamental nurseries. The discovery of Phytophthora tentaculata infecting several native plant species in nurseries and restoration sites has alerted the industry to the cryptic nature of plant pathogens and how easily they can move into the environment. Although the program has been voluntary to date, with the nurseries choosing which BMPs to employ, CDFA and the National Ornamentals Research Site at Dominican University of California are working to identify minimum requirements for acceptance into the program for ornamental interstate shipping nurseries as well as native plant nurseries. CDFA is developing a website to further support the BMP Program.

Native plant nurseries in Washington interested in participating in a multistate research program in 2015-2016 are encouraged to contact Marianne Elliott (melliott2@wsu.edu) for information. The program will investigate the movement of Phytophthora species among nurseries, restoration sites, and forests.

The Kitsap County botanical garden found to have a P. ramorum-positive Pieris plant in April had additional positive plants found in May during the delimitation survey. All infected plants were destroyed and trace-back investigations are underway. The facility will undergo a Critical Control Point Assessment (CCPA) at which time best management practice (BMP) mitigations will be identified for implementation. The BMPs will be enforced through a state compliance agreement. Federal regulatory oversight will continue to ensure the pathogen is being managed effectively.

Vaccinium parvifolium (red huckleberry) was found P. ramorum positive for the first time from two samples taken at a Lewis County, WA interstate shipping nursery during their 2015 spring Federal P. ramorum Certification Program survey. The Lewis County facility was also positive in 2014 and had undergone a CCPA as well as extensive mitigation activities. A new CCPA has been conducted to determine possible ways the pathogen has continued to infect plant material; additional mitigation efforts will completed in 2015. As a result of the new host confirmation, Vaccinium parvifolium will be added to the federally recognized P. ramorum host and associated host list.