It is important to maximize the genetic diversity of shade trees within the nation’s urban forests because of the increasing threat of exotic pest and pathogens.

The loss of elms to Dutch Elm Disease (DED) has stimulated research to select and breed DED-resistant cultivars, but the performance (e.g. growth and tolerance to other pests and pathogens) of these cultivars need to be studied further to identify the best fit cultivars for each region.

Therefore, the overall goal of the National Elm Trial is to compare the performance of DED-resistant cultivars across a wide range of growing conditions. 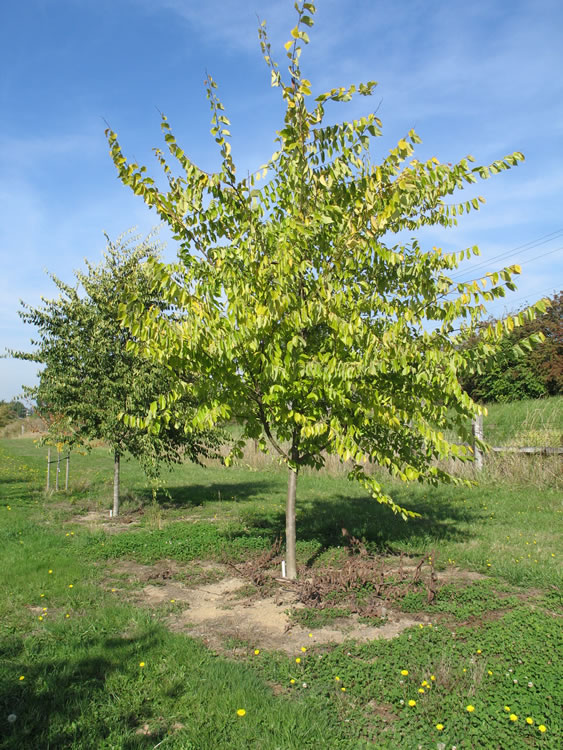 The American Elm is an example of a species that once dominated urban forests across the US, but has essentially disappeared because of the introduction of Dutch Elm Disease.

Elm trees in the United States are threatened by DED. The disease has already killed between 30-50 million elm trees throughout the UK (Brasier). Reports in North America range back to the 1920s, but its presence in Washington was not confirmed until 1978 (Maloy and Inglis 1978).

More information about the history, biology and control of DED is available in the Pacific Northwest Pest Management Handbook.

You can find guidelines and recommendations for pruning elms on this page.

The National Elm Trial is a volunteer effort to evaluate and promote the use of Dutch elm disease (DED)-resistant American and hybrid elms.

This nation-wide study has one coordinating and reporting system that is based at Colorado State University. The effort grew out of the NCR-193 Agricultural Experiment Station coordinating committee on insects and diseases of woody ornamentals, a group of researchers and extension specialists from land grant universities around the United States.

The National Elm Trial includes between 15-18 DED-resistant and commercially available elm cultivars planted at seventeen sites in sixteen states. These elm cultivars will be evaluated over a wide range of growing conditions and hardiness zones.

More information about the cultivars used in the National Elm Trial is available in a PDF Table here.

The specific objectives of the National Elm Trial are to:

More information about the project and all the sites involved is available on the National Elm Trial main site.