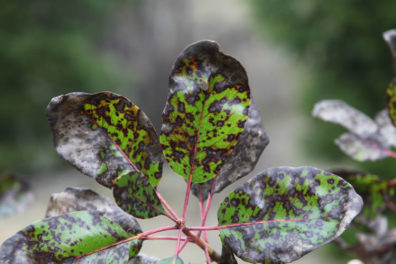 A leaf blight, consisting of brown, desiccated leaves occurring mainly in the lower canopy has been observed on Pacific Madrone throughout its range and generally occurs during periods of wet spring weather. In May 2009 and 2011 severe outbreaks occurred in western Washington and Oregon. A fungus was isolated from blighted foliage, leaf spots on emerging foliage, lesions on green shoots, and from the petiole and leaf blade of dead, attached leaves. The ITS region of the fungus was identical to the type isolate of Phacidiopycnis washingtonensis Xiao & J.D. Rogers, which has been reported to cause rots of stored apple and persimmon fruit and cankers and twig dieback of apple and crabapple trees, but has not been reported on other plant species.