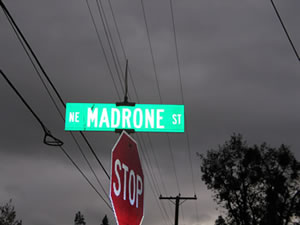 “North American members of the genus are called Madrones, from the Spanish name madroño (strawberry tree) although this terminology is not used in Canada. The European species are also called Strawberry Trees from the superficial resemblance of the fruit to a strawbrry; some species are sometimes referred to simply as the “Arbutus”. In the United States, the name “Madrone” is used south of the Siskiyou Mountains of southern Oregon/northern California and the name “Madrona” is used north of the Siskiyou Mountains according to the “Sunset Western Garden Book”. In British Columbia, the trees are simply known by the name “Arbutus.” All refer to the same tree, Arbutus menziesii, native to the Pacific Northwest and Northern California regions. It is Canada’s only native broadleaved evergreen tree. Some species in the genera Epigaea, Arctostaphylos and Gaultheria were formerly classified in Arbutus. As a result of its past classification, Epigaea repens (Mayflower) has an alternative common name of “trailing arbutus”.”