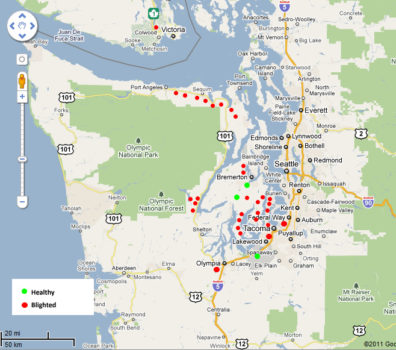 “We live in the NW area of Camano Island and have been wondering what is wrong with most of the madronas in our area. We were lucky enough to see an article in the local news booklet Crab Cracker. It directed us to you.
It definitely looks like the leaf blight described on the website. The trees in our yard are the only big trees we have and are most likely about 15-20 years old. They are flowering now and I have noticed that the new growth so far looks good.”

‘This blight is similar to what I have experienced with my cherry trees, the larger trees are able to recover with new growth but younger trees struggle to stay alive.

The worst damage that I have seen has been in the Dabob Bay area, trees that are smaller than 10 feet completely wiped out with very little new growth. Trees taller than 15 feet seem to have vigorous new growth and will probably be ok.
Worst damage is with trees that are not facing west and not on hill sides. Poulsbo and Bainbridge lesser damage with similar symptoms

My greatest concern is that the younger trees (10 feet or less) will have high mortality rates. Another problem is that many homeowners are being advised (by “arborist’s” with chain saws) to cut down sickly looking Madrone’s. Madrone’s have an incredible ability to continue living many years even though they may have a lot of dead limbs. Unfortunately people do not under stand this as well as the importance on stabilizing hillsides. I have seen mature Madrone’s that have 80% of their trunk complexly dead and yet they continue to live

I will send photos soon. The most interesting one will be that a 20 foot Madrone in my backyard in Poulsbo (new growth from a large tree that had been cut down before we moved here) is perfectly healthy; in fact it is the only tree that I have seen that doesn’t have any blight. While 50 feet away is one that is extremely damaged.”

“All the Madrones on Highway 3 and the ones in my neighborhood (between Clear Creek Road and Hwy 3) down Pioneer Hill Road are greening out quite nicely. I never imagined that with nearly 100 percent coverage of that horrible fungus that they would green out. Nature is amazing. But of course let’s see how green they stay, right? I’m keeping my optimistic fingers crossed.”

“We have *Many* infested madrones on our acre. Manzanita Bay, W. Bainbridge Island.”

“I live on Orcas island and am watching our Madrones rapidly going downhill. There HAS been an increase in dying foliage in the last couple of weeks. I walk all over the island and it’s the same everywhere. Now that I’ve down some reading, it seems I’m a little behind the timeline but the problem is pervasive on the west coast.
Has anyone thought to connect this sad and serious blight with toxic aerosol spraying that has been observedly on the upswing during most of May?”

“I live on the Key Peninsula in the Minter Creek area off of Highway 302 and all the Madrone trees along the road are dying, specifically along the Creviston Road.  All of the leaves are brown and crumpled looking.”

“My location is on E Hwy 106 near Union, WA.  The madrona on my property appears to be affected by the blight written about in your article.  All of the leaves have turned dark brown, berries have appeared on the crown of the tree.  This problem is very evident all along Hwy 3 from Gorst to Belfair and along Hwy 106 from Belfair to Union. The condition looks pretty severe with better than 70% of the leaves turning dark brown.”

“My husband and I live out on the Key Peninsula in Lakebay.  As we drive along side roads and down the Key Peninsula Hwy towards Purdy it looks like all the Madrone trees are dying or dead.  All the leaves are dried up and brown.  We don’t see any new growth at all on most trees.  They just don’t look like they’re going to come back.”

Madrones in plantings at WSU-Puyallup: All of the trees in one planting have 80-100% dead foliage in the crown. Arbutus unedo in the same planting appears to be resistant to this blight. Another planting of older trees has some with resistant foliage.

“Most large madrones along I-5 in the Lakewood-Ft Lewis area have more than 80% of their crown blighted. Some smaller trees in the understory growing with Garry oak had few symptoms and looked relatively healthy.”

“I have observed very heavy foliar blight of Madrone from roadsides on Vashon Island and parts of the Kitsap Peninsula (Hwy 16 from the Tacoma Narrows bridge north to Sedgewick Rd – just S of Port Orchard – and west to Belfair) visited recently.  Although the occurrence of madrone is inconsistent among the developed sites and mixed conifer forest, most of the madrone trees observed have 80 to 100% of their foliage damaged (few trees had produced new leaves yet).  Usually only the tops of the trees are unaffected.   Shorter trees tend to be more completely affected than taller trees.

There are a couple places where trees of similar heights and close proximity to heavily damaged trees are not affected or less affected.  Sometimes they are on opposite sides of the road or in a more open growing situation, but the factors that would contribute to relative differences in damage are unclear to me (especially when in motion from the driver’s seat).  The most interesting place to observe this is probably near Belfair.

I also received a telephone call from a woman on the Key Peninsula reporting heavily damaged madrone along the roadways from Purdy to Longbranch.  She said that the trees on her property near the water are not affected.

I’ve attached a map (part of the Tacoma quadrangle map) as a record of my observations.  The orange line is a little misleading because madrone is not consistently present along every stretch of roadway.  These are mixed forests, but the madrone is a regular component and blight symptoms are quite consistently severe.”

“We have a madrone in the front of our building that is severely affected.  Unless you look carefully, no green is visible on the leaves (but a few leaves have a bit of green left).   This tree has had sad looking foliage for several years.
0.8 mile west of I-5 at Exit 99 (Thurston County, WA)”

“When we went hiking down by Lake Cushman (Mason County) last month —lots of sites in Kitsap, Mason counties—and many right along Hood Canal with badly damaged trees.  Best looking group of trees were observed on a highway triangle— in Bremerton where 16 forks to continue on North or curves into the Bremerton shipyard area.”