Questions on SOD in general 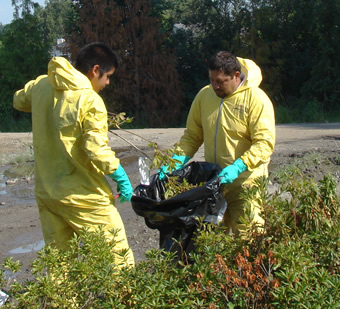 A: A new plant disease first detected in the U.S. in California in 1995. The disease attacks over 100 plant species in more than 37 different plant families. The disease got its common name (“Sudden Oak Death”) when thousands of healthy oak and tanoak trees in California appeared to suddenly die for reasons scientists couldn’t explain.

The cause of the disease is the water mold Phytophthora ramorum (commonly abbreviated as P. ramorum), which is a new species of Phytophthora that was described in 2001. Ramorum leaf and shoot blight is another common name for this disease on many of its hosts.

A: We don’t know. Phytophthora ramorum is an invasive species of unknown origin.

A: No . P. ramorum only attacks some woody and herbaceous plants.

Q: How destructive is SOD?

A: It depends on the host plant attacked, and the strain of SOD involved. SOD is very lethal to certain types of oak trees –but damage on many plants is limited to dead spots on leaves and/or a twig dieback. You can learn more about SOD symptoms on some common host plants here.

Q: What could ultimately be the impact of SOD on Washington’s economy?

A: This is an important question. There have already been a number of economic impacts associated with the detection of this disease in Washington nurseries. Losses include the costs associated with the destruction of infected plant material and mitigation treatments (i.e. soil fumigation, etc.) as well as the lost opportunity to sell plants that are on hold during the Confirmed Nursery Protocol (CNP). Some nurseries have gone out of business, in part because of the costs of dealing with SOD. Some nurseries have also decided not to sell certain high risk host material, such as rhododendrons. Many of the high risk hosts are commonly used in landscapes and nurseries that do not carry these materials effectively face potential losses in sales. While the ecological impact on our forests associated with the spread of this pathogen from nurseries into the environment are unknown, it is clear that the resulting quarantines will likely have a major economic impact on the state. This will range from increased costs associated with monitoring and certification for nursery stock and Christmas trees, to the landscape industry, Christmas trees, the forest products industry, yard waste recycling programs, composting facilities, and regional ports.

Q: How many strains of P. ramorum have been identified?

A: A total of three strains have been identified; two North American strains and one European strain . All have been detected in Washington. You can learn more about the populations of P. ramorum in Washington here.

Q: How many times has SOD been detected in Washington since 2003?

A: Hundreds of times within 45 nurseries, two rivers, and several trace-forward landscape situations.

Q: Where have the detections occurred?

Q: What is a “certification inspection”?

A: An inspection of a nursery wishing to ship potential SOD host material out of state. Certification inspections are required by APHIS and are conducted by WSDA. A list of certified nurseries can be found on the WSDA website here. Nurseries that do not ship out of state are not on this list. When buying from a nursery, ask if they buy plants from certified SOD free nurseries or if they grow the material on site.

Q: What is a “trace forward” inspection?

A: An inspection of plants from a nursery where an infected plant was detected that have been purchased by a company or individual.

Q: Has SOD ever been detected on a plant shipped out of state from a Washington nursery?

A: Yes. On one occasion a nursery in South Carolina detected SOD on a plant shipped from Washington

Q: On what kinds of plants in Washington has SOD been found?

Q: If I own one of these five plants and think the plant has SOD, what should I do?

A: First, take this quiz to determine the probability that your plant has SOD. If you suspect SOD, you can submit a sample to the WSU Puyallup Plant and Insect Diagnostic Laboratory.

Q: What other common plants are on the SOD host list?

A: Other host plants commonly found in Washington include salal, madrone, Oregon grape, and evergreen huckleberry. A complete list of SOD hosts can be found on the USDA-APHIS website here.

Q: How is SOD spread?

A: Primarily through physical contact of infected plants with other host plants. SOD is also spread through the movement of soil and water (i.e., rivers, rain, mist, dew, and splash from overhead irrigation) that has acquired the P. ramorum pathogen from prior contact with infected plants.